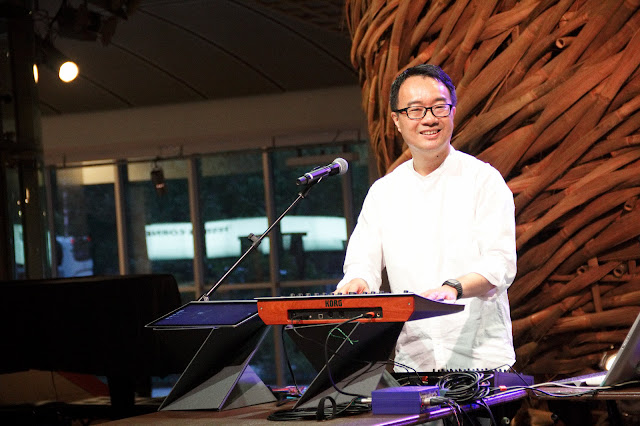 With over 30 years at the forefront of the local music scene, and 15 years of expertise in Ableton music software, Benjamin Ang now conducts production and performance classes with Ableton Live, Ableton Push, and Max for Live at POP Studio DJ. Ben is one of only 200+ official Ableton Certified Trainers worldwide, and has taught hundreds of students at workshops, seminars, and at the Electronic Music Lab (National University of Singapore).

As Principal Tutor of the Electronic Music Lab (EML), a performance group which is part of the Centre for the Arts, National University of Singapore, Ben has been exuding his passion for education through his inspiring and carefully-conducted production classes there, as well as at the School of Music & the Arts (SOMA).

You might also recognise Ben as Cosmic Ben, one half of iconic home-grown electropop/synthpop duo COSMIC ARMCHAIR, described by the Straits Times as a group that ‘defies any form of easy categorisation or criticism’. COSMIC ARMCHAIR were recently signed to international electronic music label Alfa-Matrix, joining a world-renowned roster including the likes of analogue techno icon Adam X and British industrial legends Nitzer Ebb. As of 2018, the group have released four EPs and one full length album, as well as numerous club and dance remixes for European artists. His other musical projects include experimental ambient found sound compositions such as Project FSED.